Some of the messages that Abq Jew has received.
And a call for peace, love, and understanding. 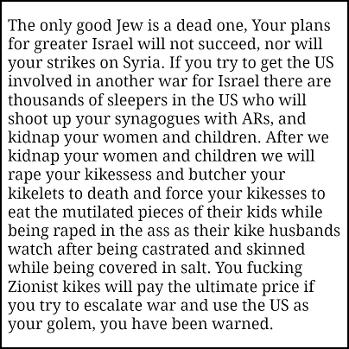 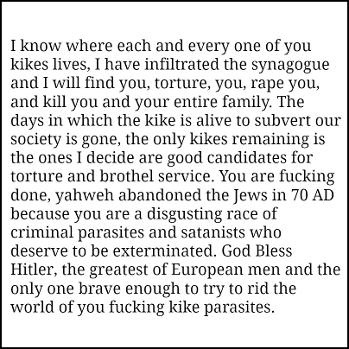 Responses to These Messages

Keep going! We need to speak up for what we believe in.

So sorry to read in NY Times about the threats you received. Please stay safe and stay strong.

I just read about this in the New York Times' "This Week in Hate" column. So appalling and sickening. You are obviously a mensch to be able to keep your sense of humor through all this. Take care. #NoHateInNM

Thank you for sharing your story in the NY Times; although I am very sad and very distressed that such a story had to be shared. As much as I now write my representatives and sign petitions, I am also determined to make more of an effort to support others during these trying times. I just wanted to say: Please keep blogging! You are not alone! Sending you good wishes from across the Atlantic (Belgium).

My heart breaks for you and all Jews including me - through my maternal mother and grandmother, who fled Polish persistent pogroms to then-welcoming 1800's Lutheran northern Germany. I weep over this madness and evil. You are in my prayers as are all Jews. Please Father, protect the good man running this website and all of your chosen ones, which is not always easy. Amen, Shalom.

Wow. I'm really baffled by antisemitism, even though I grew up with an antisemitic mother. But I am also a child of the liberal West Coast Catholic church of the 1960s and 1970s, and the nuns who taught me at school emphasized loving everyone, regardless of religion or cultural background. As an adult, I have found the Jewish people I've known to be wonderful, meh, and everything in between - just like most of the rest of humanity.

But then there are people like these, that are just ... I don't have a negative enough descriptor. I'm ashamed to be of the same species.

I'm looking for someone familiar with Jewish history who can answer my lifelong question: "Why has Europe always picked on Jews?" I'm heading for my 60th year, and just never figured that out. I'm beating the bushes for a rabbi or two to answer, and I found out about your hate-mail encounters. Well, this will NOT be that. I'm just curious - I've spent my whole life stumbling across "We hate Jews" sentiment and throughout history, much more of this. I just wonder WHY?!! What did this small segment of the world's population do to earn such enmity?

I am really sorry that you got the mail but glad that there is wide publicity about this issue.  I remain optimistic that we combat such attitudes with education, and you have taken important steps to help educate people.

I live in Niagara Falls, Canada. Just read the article in the NY Times. I'm so worked up about it, I thought I'd let you know. My family wishes you all the best in all your endeavors. Thanks for speaking out. As John Donne said .. No man is an island. Any man's death diminishes me, for I am involved in mankind. Wish we could help.

I also just read about this in the New York Times' "This Week in Hate" column, although I have lived in Albuquerque for the past 40 years. Is there anything I can do to help? I know many others in town who would also be willing to help if there was only something we could think to do. Some of them may already be following your blog. From now on I will be following your blog and will spread the word about it. It is a real shame that such people as the one who sent you that horror feel they have been empowered and freed by the recent election.

I just saw the article in the NY Times about the hate mail you have been receiving. Seemingly every day now there are reports of increased threats to and denigration of minority groups in this country, and it never ceases to make me sick and disappointed. I was never so deluded to think those evil thoughts and intentions were solely part of the past, but witnessing so much of it being freely expressed in public without denunciation by (and now even with tacit approval from) the highest levels of our government is simply unacceptable.

Any time I come across hate, I feel it is my duty to make a concerted effort to reach out to whomever is being targeted and let them know that a great deal of people in this country support, love, and respect them. It is a very difficult time and it often seems hopeless, but I am heartened by the fact that such insidious and evil prejudices are being ever more rejected by subsequent generations and that the majority of the country already rejects being ruled by hatred and fear (even if the election results didn't fully reflect that truth). I wish health and safety to you, your family, and all the people important to you in your life.

I was sickened when I read in the New York Times about the anti-Semitic comments you have received on your blog. I am an American Muslim. I have experienced quite a few incidents of Islamophobia, and sadly, I have come to expect them. Muslims, after all, are the new Japanese, the new communists, the new blacks, and the group that most people are comfortable hating. But because of publications like the New York Times and C.A.I.R.

I also have heard about the rising tide of anti-Semitism, and I am sickened. It's as if Trump's ascendancy to power has given all those who hate anyone a free pass to express their vitriol whenever they want. And this is not the America I remember. I want you to know that as an American and as a Muslim I stand with you and with anyone who has to experience any sort of hatred based on who they are, the color of their skin, their ethnicity, their sexual orientation, their religion - anything. Hatred will never win. Wishing you peace! #Resist

I too saw this in the NY Times. plunged me into a bit of a funk. Not jewish, i'm 78 years old, female, and grew up taught by my Okie dad - who relocated us to California during the Depression - that each generation would automatically better itself relative to the prior one. Guess not. Just giving you a little history to maybe let you know that some who aren't Jews have the same values and connections to humanity that Jews have hung onto for so long, and have taken inspiration from your suffering and overcoming which, it seems, you and others like you are fated to endure even now. With so much love ....

I'm so sorry about the hate mail you received. I don't know what to say, but I do want you to know that people like me condemn such acts which are intended to inspire fear and intimidate. You are not alone.

I'm so sorry to hear that you were the recipient of hate mail. We are supporting you...please let us know if there's something tangible we can do.

I wasn't brave enough to open the link to read the actual emails ... unfortunately, there has been much hate and xenophobia released in recent months. If there's a positive side to this, it's to see how many people are banding together to protest, to take positive action, to call for tolerance and diversity and civility.

Oy, so very, very sorry that you personally were targeted. My thoughts are with you!!

I grew up in 'Burque in the way back when era ... and was absolutely horrified
to read about what has been happening in my hometown.

It saddens me that these bits of behavior have now become normalized.
I just want to say ... my best to everyone ... my deepest sorrow ....

My tio [uncle] liberated Dachau ... and he refused to talk to me
about what he witnessed ....

In solidarity with you and my love to everyone.

What's So Funny About Peace Love and Understanding?

As I walk through this wicked world,
Searching for light in the darkness of insanity.
I ask myself - is all hope lost?
Is there only pain and hatred, and misery?

And each time I feel like this inside,
There's one thing I want to know:

And as I walked on through troubled times,
My spirit gets so downhearted sometimes.
So where are the strong?
And who are the trusted?
And where is the harmony?
Sweet harmony.

Cause each time I feel it slipping away,
Just makes me want to cry.

So where are the strong?
And who are the trusted?
And where is the harmony?
Sweet harmony.

Cause each time I feel it slipping away
Just makes me want to cry.